The Pledge of Allegiance of the United States is an oath of loyalty to the national flag and the republic of the United States of America, originally composed by Francis Bellamy in 1892. The Pledge has been modified four times since then, with the most recent change adding the words "under God" in 1954.  According to the United States Flag Code, the Pledge "should be rendered by standing at attention,  facing the flag with the right hand over the heart. When not in uniform men should remove any non-religious headdress with their right hand and hold it at the left shoulder, the hand being over the heart. Persons in uniform should remain silent, face the flag, and render the military salute"

PLEDGE of ALLEGIANCE
I pledge allegiance to the Flag of the United States of America and to the Republic for which it stands; one Nation under God, indivisible, with liberty and justice for all.


The Star Spangled Banner - In the summer of 1814, the British troops burned the city of Washington and the British Royal Navy ships moved up the Chesapeake Bay toward the harbor at Baltimore, Maryland.  The British captured Americans and held them aboard their fleet of ships in the harbor.  Francis Scott Key, a 35-year-old American lawyer and amateur poet, visited the British fleet in the harbor on September 13th to secure the release of Dr. William Beanes who had been captured during the raid on Washington.  The two were detained on the ship so as not to warn the Americans while the Royal Navy attempted to bombard Fort McHenry.  At dawn on the 14th of September, Key noted that the huge American flag, which now hangs in the Smithsonian American History Museum, was still waving and had not been removed in defeat during the night.  The sight of the flag inspired him to write a poem, "Defense of Fort McHenry".

The poem was set to the tune of a popular British drinking song, written by John Stafford Smith and renamed "The Star-Spangled Banner".   The inspiring song would soon become a well-known American patriotic song accepted by popular demand.  Recognized for official use by the Navy in 1889 and the President in 1916, the Star Spangled Banner became even more accepted as the national anthem during the World Series of Baseball in 1917 when it was sung in honor of the brave armed forces fighting in the Great War.  The performance moved everyone in attendance, and has been repeated for every baseball game since then.  After 116 years of popular use as the National Anthem by the people, the American Congress proclaimed the Star Spangled Banner the national anthem by a congressional resolution on March 3, 1931 (46 Stat. 1508, codified at 36 U.S.C. § 301).

Oh, say, can you see, by the dawn's early light,
What so proudly we hailed at the twilight's last gleaming?
Whose broad stripes and bright stars, thru the perilous fight,
O'er the ramparts we watched, were so gallantly streaming?
And the rockets' red glare, the bombs bursting in air,
Gave proof through the night that our flag was still there.
O say, does that star-spangled banner yet wave
O'er the land of the free and the home of the brave?

On the shore dimly seen through the mists of the deep,
Where the foe's haughty host in dread silence reposes,
What is that which the breeze, o'er the towering steep,
As it fitfully blows, half conceals, half discloses?
Now it catches the gleam of the morning's first beam,
In full glory reflected, now shines on the stream:
Tis the star-spangled banner: O, long may it wave
O'er the land of the free and the home of the brave!

And where is that band who so vauntingly swore
That the havoc of war and the battle's confusion
A home and a country should leave us no more?
Their blood has washed out their foul footsteps' pollution.
No refuge could save the hireling and slave
From the terror of flight or the gloom of the grave:
And the star-spangled banner in triumph doth wave
O'er the land of the free and the home of the brave.

O, thus be it ever when freemen shall stand,
Between their loved home and the war's desolation!
Blest with victory and peace, may the heav'n-rescued land
Praise the Power that hath made and preserved us a nation!
Then conquer we must, when our cause it is just,
And this be our motto: "In God is our trust"
And the star-spangled banner in triumph shall wave
O'er the land of the free and the home of the brave!

PREAMBLE to the CONSTITUTION of the UNITED STATES of AMERICA

We the People of the United States, in order to form a more perfect Union, establish Justice, insure domestic tranquility, provide for the common defense, promote the general welfare, and secure the blessings of liberty to ourselves and our posterity, do ordain and establish this Constitution for the United States of America.


The American's Creed is the official creed of the United States of America. It was written in 1917 by William Tyler Page as an entry into a patriotic contest. It was adopted by the U.S. House of Representatives April 3, 1918.
AMERICAN'S CREED
I believe in the United States of America as a government of the people, by the people, for the people; whose just powers are derived from the consent of the governed; a democracy in a republic; a sovereign Nation of many sovereign States; a perfect Union, one and inseparable; established upon those principles of freedom, equality, justice, and humanity for which American patriots sacrificed their lives and fortunes.  I therefore believe it is my duty to my Country to love it; to support its Constitution; to obey its laws; to respect its flag; and to defend it against all enemies. - William Tyler Page - 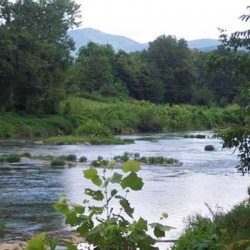